First we got up and packed up camp, and then had raisin bran and hot drinks for breakfast. It’s funny in the front country I hate milk with cereal, while here that’s pretty much all I eat for breakfast. The things you do when you’re hungry…

Anyway we roped up and like I said before, I lead my own rope team! However I was still behind two other teams, but it was still great. Jaime said I kept a good pace really well, so we hiked for about an hour out of camp and then took a break at the bottom of the pass. While we were already at 6,500 ft, this still seemed like a vertical climb to the top!

Slowly but steadily I led my team up the pass. I must be in really good shape now too, because it wasn’t that hard for me. The scariest part was the very top where there was a steep sheet of ice we had to go over in snowshoes. I had seen the other two teams do it, but when I got up there my snowshoes slipped and I slid about 3 – 4 feet. I caught myself with my ice axe, but when I tried again I got the same result. I panicked for a second, but the people on my rope team (Jaime, Jake and JP) supported me. Jaime suggested I try going a different way, so I looked around and found a rock field that was also nearly vertical, but I thought it might give my snowshoes something better to grip. I made my way over, and to my happiness was able to walk up the hill! So me and my team continued up that route. 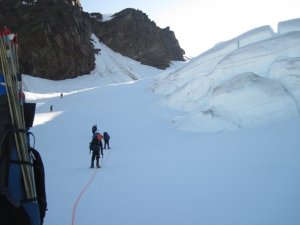 Within a minute we were at the top of the pass and the view was UNBELIEVABLE!! We could see the Chugach range, the rest of the Eastern Alaska range, and best of all, Denali. I tried to take pics of Denali, but it was so far away I don’t think my camera got it.

The basin we were descending into was absolutely incredible. The pictures look nothing like the real thing! 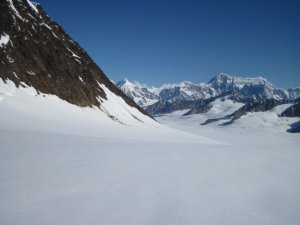 After we made it over the pass our group took a rest and I was offered an even cooler opportunity… leading all of the teams into the basin. Of course I yelled “YEAH!” and took up the responsibility. Leading everyone into an unknown area and finding a good camp spot was the coolest feeling in the world. 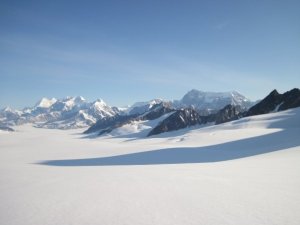 I led everyone down the pass, around cracks and over snow bridges, until Jaime helped me pick out a spot at the bottom of the basin that looked great for camp. I led everyone there, and we spread out, and me and a few others began probing the new campsite for cracks and crevasses which took about two hours. Finally with that complete, we set up snow camp #3, which is the most awesome one yet since we’ll be here for 5 days. We’re getting re-rationed here too, but won’t set up the runway until that day gets closer.

We had two hours after that before class, so I tried to read but ended up falling asleep. Guess I didn’t realize how tired I was!

Afternoon class was about anchoring systems for steep and ice climbs, and after that I thew together some stir-fry for our tent that ended up being the best dinner I’ve made so far! Go chef Sophia! Haha.

Well that was pretty much my day. My tent mates are still awesome, and yes we’re still nerds and sit around and read while dinner is cooking. We work really well together, and trust each other with responsibilities which is really nice. It keeps away a lot of the stress I had with my last tent group. Yay =)

So tomorrow we’re roping up at 7am and climbing the tallest peak in this basin. I’m so excited!! Since that last climb sometime last week, I’ve been eager to climb another peak, and this one will be quite a challenge. I think it will go really well though. I’ll be sure to take plenty of pictures too!

Well time for bed since I have to get up at 5 again.