Posted on April 1, 2015 by Running Yak Leave a comment

In 2013 I ran the Flying Pig Marathon. It was awesome, and part of reflecting on that race was realizing how much more training for it taught me than just how to run really really far. I learned about myself, life and all sorts of things in between.

Then I decided to run two more marathons. Because, apparently, I’m crazy.

So of course now I’ve learned even more about myself and running, which is part of the reason why I really love it. It’s a sneaky teacher that lures you in with promises of a runners high and bananas, and then shoves lessons down your throat whether you wanted them or not.

I’m onto you, running. You and your sly tricks.

I’m going to be honest, taking such a HUGE amount of time off of my PR in my second marathon was a surprise.

I love running, I really do. But, sometimes, I hate it too. Like when I’m trying to train in the winter, alone, and it seems like my paces aren’t going anywhere, and neither am I. My training plan seemed too slow. Week after week running at 8:50 gets really old, and by the end I started questioning how well I could really do in this marathon, and what effect doing this stupid 8 miler in the grey slush next to the road would really have on me running through a very not snowy Louisville in April.

Then Ahhhnuld showed up and set me straight. Okay maybe not. Let’s pretend he did though.

But looking back, those were the important runs. In the grand scheme of things, that long exercise over and over made a huge difference in not just my endurance, but in my psyche. It made me more persistent. I won’t try to sit here and deny my struggle with the instant gratification monkey, but once I do get started on something I will do everything I can to finish it, which I think is an important skill. Especially when you have anywhere from 0 to 26.2 miles to go.

I spy another life lesson here about how little things build up to big things (surprise!).

So after training 5-6 days a week, with mind-numbing long runs and weight sessions added in, should I really have been surprised to PR by quite so much? No.

But when I saw the time at the finish line when I came around the last turn in Louisville, did I think the clock was broken? Yes.

This lesson is one of those ones you see on cheesy exercise slide shows all the time, and it seems like it should be really obvious. However, mix in a large dose of that persistence I just mentioned, and you get a runner who took an embarrassing amount of time to learn how much is too much. Said runner might be me. 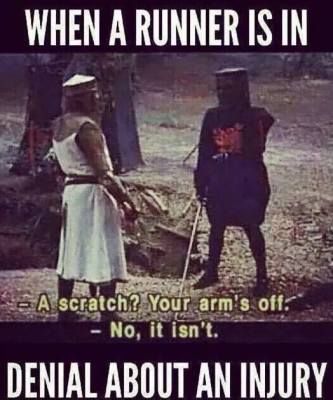 If you remember from my recap of training for the Flying Pig Marathon, I got achilles tendinitis early on and had to cross-train my way through training. Since then, I’ve run two more marathons, and have somehow managed to get sick and/or injured while training for both of them!

Yes. That’s a 1:1 ratio of injured-during-training to marathons run.

…Until now! I’ve only got a month left of training for the 2015 KY Derby Marathon, and I’ve managed to stay disease and injury free. So what did I do differently this time?

Listening to your body also includes understanding when it’s being serious, and when you’re hearing the blerch. Don’t listen to the blerch.

If you were anywhere near the Eastern/Central US in 2014, you remember how around January 2 we got a ton of snow, and everyone was pretty happy about it.

Yay! Fluffy, white snow. I can run in snow.

My training for marathon #2 was set to begin on January 6, and by the third, the forecast looked like this: 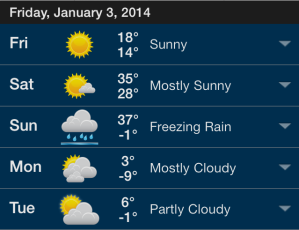 PERFECT. I’ll start training the morning after some freezing rain in sub-zero temps. No biggie.

Oblivious to my sarcasm in that last caption, mother nature decided to play a fun little prank.

It kept getting colder.

And by Monday morning, my University was shut down while the national weather service posted a wind chill warning because not only did the high for the day drop below zero, the windchill was a whopping -35F. The polar vortex had come to pay a little visit!

I love it when the term ARCTIC BLAST is used in the forecast.

I had two clear choices here.

Bet you can’t guess which one I chose?

GUYS CHECK OUT MY FROZEN EYELASHES

It probably helps that I’ve been both skiing and mountaineering, so I have all this random winter attire at my disposal to do stupid things in. Like run in a polar vortex.

Suggestion for what to wear on a run with a -35F wind chill:

Under all those layers I was actually pretty darn toasty. If I did this again I’d probably only wear two shirts and run a little faster.

Perks of running during a polar vortex

Needless to say, I do not get cabin fever.

4. GU IS DELICIOUS (but only when you’re running)

I trained for and ran the Flying Pig Marathon while eating payday candy bars because they happen to be gluten free, and delicious. This incredible combo of tasty, salty, sweetness paired with seemingly healthy nuts came across as a fantastic idea during training. What could possibly go wrong?

This is some sort of weird theme in my life.

It was a terrible idea.

Long story short: my stomach hated me, and I hated my life for the last 8 miles of my first marathon. It turns out, eating that much protein during a race meant my body had to choose between sending lots of blood to my legs for running, or sending adequate blood to my stomach to digest the food. My body chose my legs, and so my stomach rejected the food. After the race I learned that GU is gluten free, so that summer I bought a few of the orange flavor and tried them during a long run.

The second that weird gel of salty, sugary, tangy goodness hit my tongue 8 miles into a 10 mile test run, I was hooked. I questioned why people weren’t lining up to buy out the world’s supply of GU, slurping down the delicious little packets during all hours of the day.

At ~$1 a packet GU is really not that expensive, but I’m frugal, so I decided that this amazing run food would only be used for running.

That is, until about 5 months later when I was really hungry, and in a hurry to get to an exam. I quickly rummaged through the pantry looking for something to eat ASAP when it dawned on me that I had 5 packages of GU in my running stuff. So I grabbed an orange one and went off to my exam.

One of the biggest rules I learned after returning to the front country when I went mountaineering was: things that taste amazing when you’re tired and expending a lot of energy generally taste like crap when you’re in a more normal state of mind. I forgot this rule.

So I sat down at this exam, excited for my orange-flavored-mystery-sludge to help me get going on this test. I opened it, and squeezed some into my mouth.

This was a horrible decision.

The oddly-metallic, salty, snot-gunk definitely did not taste like oranges. Sometimes I get on gluten free food for being nothing like what it is imitating, and this was somehow worse. Much worse.

In fact, I’m not sure how something that delicious on a run could possibly taste that bad just because I wasn’t running. I’m sure of one thing though:

Don’t ever eat GU if you’re not running.

If you are ever tempted to eat GU in a non-running situation, just listen to your inner Shaq. Because apparently, inner Shaq is a thing.